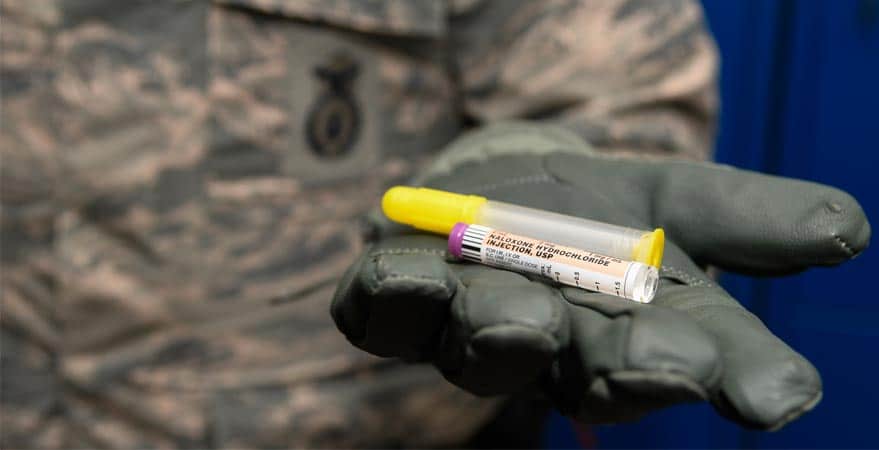 Rarely a day goes by where there is not some form of news media reporting on a drug-related tragedy.  It seems our nation is experiencing an opioid epidemic. As heroin continues to gain popularity, in addition to prescription drug addictions to other opiate pain medications, coping with the aftermath has become a pertinent issue.  Additionally, with the rising rates of mental health and substance abuse disorders, it is not uncommon to see the deadly results of mixing prescription medications with alcohol or other drugs.

Historically, law enforcement called to the scene of a drug overdose or interaction would waste precious minutes waiting on medical personnel to arrive on the scene.  In emergency situations, those few extra minutes are critical in determining a life or death outcome. In response to this knowledge, many Colorado law enforcement agencies are arming their officers with Naloxone.  This opioid antagonist drug can be administered as soon as the police arrive on the scene of an overdose. This quick response is able to save many lives that would be lost while waiting on paramedics.

Officers must receive stringent training before they are permitted to administer Naloxone.  This ensures officers react safely and efficiently in an overdose situation. The training also includes learning the signs of overdose and learning to respond in a correct and timely manner.

The training concludes with officers being trusted with either the injection or nasal spray form of Naloxone more commonly known as Narcan.  This drug can essentially reverse an overdose, reversing the depressant qualities of opioids, often resulting in saved lives.

Overdoses are not always cut and dried events, where an officer is called to a residence where the event has occurred.  Unfortunately, officers are often the first responders due to the effects of an overdose taking effect after a person is behind the wheel of a car.  Often, this will cause erratic behavior resulting in being pulled over, or an officer finding the person passed out in their car along the road. In these situations, time is of the essence.  Very often, the responding officer can administer the Narcan, saving the person’s life, when waiting for paramedics to arrive may have resulted in death.

When You Need an Attorney

Those struggling with opioid addiction are often a danger to more than just themselves.  Driving while impaired by drugs is dangerous to other drivers, particularly if the person passes out behind the wheel.  While law enforcement’s use of Naloxone is saving lives, once the recovery takes place the offender often faces unpleasant consequences.  Being treated with Naloxone is administered in conjunction with drug-related charges. Very commonly, one charge will consist of driving under the influence of a drug offense.

Being convicted of charges of this nature can be devastating in the life of the offender.  With the United States holding an overwhelmingly strict stance towards the criminalization of drugs, the consequences can be quite severe.  In such matters, it will be imperative that you have an adept criminal defense attorney to represent your case. It will be crucial to hire an experienced representative who is familiar with such cases to help you achieve the best outcome possible.