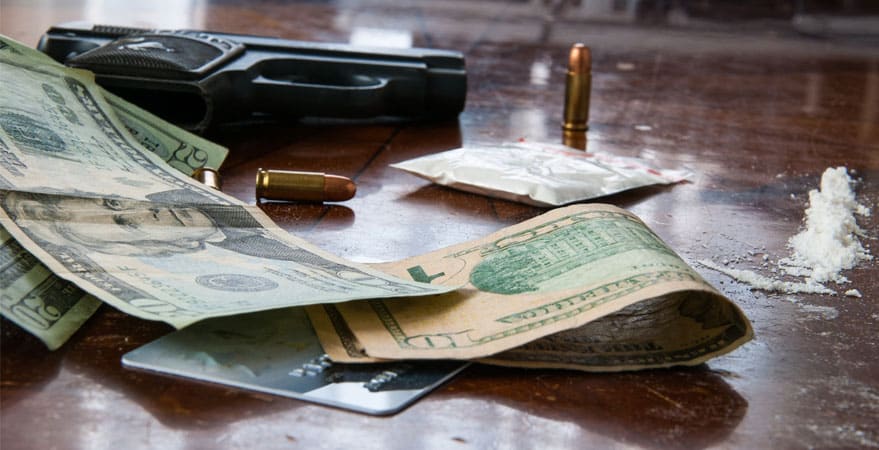 When you hear the term drug trafficking, what comes to mind?  Do you think of elaborate drug networks with dealers transporting hefty amounts of various illicit substances?  This is most often what people understand drug trafficking to be.  While this understanding is not incorrect, there are many other legal breaches that constitute a drug trafficking charge.

You can be guilty of drug trafficking in Colorado for various actions, including selling, manufacturing, distributing, dispensing, or being in possession of any illicit substance for the purpose of manufacturing, distributing, selling, or dispensing the drug.  Furthermore, you will also be held responsible for drug trafficking if you try to persuade or incite someone else to take part in any of the above-described actions.  You may even face drug trafficking charges if you are merely found with the necessary equipment, chemicals, and/or supplies with the purpose of producing an illegal substance.

In addition to drug trafficking charges accrued for dealing illegal substances, a person can also be liable for the same offense if they merely possessed the substance but had the intent to distribute.  If this definition wasn’t already confusing enough, the interpretation of intent can make such charges appear in shades of gray.  Therefore, it is up to the court system to establish reasonable evidence of intent in order to convict someone on this basis.  Without evidence, it is impossible to assume what a person was thinking or intending on doing.

How Is Intent Proven?

The most common way to show evidence of intent for drug-related crimes is the consideration of how much of the substance the person was in possession of.  If the amount was large and arguably more than a single person would be possessing for personal use, they likely were planning on trafficking the substance to others.

In both of these scenarios, it is possible for persons innocent of drug trafficking to find themselves facing charges for just that.  A quantity considered “too large” for personal use is enough to prove drug trafficking in court.  For many, this is simply not the case.  Depending upon the circumstances, a user very often will purchase a larger quantity and lay it back for personal use due to the difficulty of obtaining them through the dark internet.  In such cases, the user did not have the intent to distribute the substance yet will still have enough evidence against them to support a drug trafficking charge.

With so many gray areas, it will be crucial for your future and well-being that you are not convicted for a crime you did not commit.  If you find yourself facing charges for drug trafficking, don’t delay contact an experienced DUI attorney today!