Skip to content
Previous Next
Is A DUI A Felony or A Misdemeanor?

Is A DUI A Felony or A Misdemeanor? 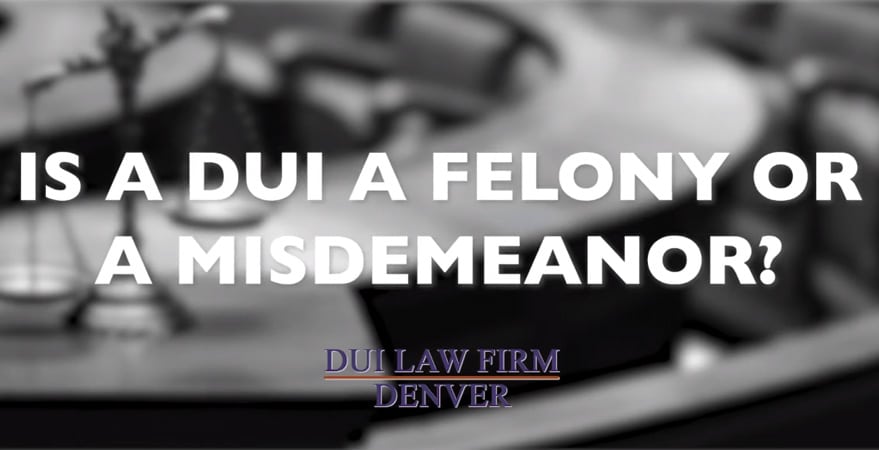 If you or a loved one were recently arrested for DUI, you may be left wondering if you will be charged with a felony or misdemeanor? If you are currently facing this frightening scenario you may be wishing for a concrete, black or white answer. However, Emilio De Simone, at DUI Law Firm Denver, explains that “the short answer is it can be both.” How you are charged will largely depend upon the circumstances of your specific case, as well as other mitigating factors. Continue reading to learn more about what constitutes a felony DUI versus a misdemeanor DUI.

First Things First: A DUI Charged as a Misdemeanor

If you have been charged with a misdemeanor for a recent DUI, it was likely a result of a first, second, or even third offense without aggravating factors. According to Emilio De Simone, at DUI Law Firm Denver “if it’s a first, second, or third DUI, and no one was hurt or died in an accident, the DUI will likely be charged as a misdemeanor.” Despite this lesser charge, any DUI is extremely serious and carries with it a host of negative and life-altering consequences.

Consequences of a Misdemeanor DUI

Even for a first offense DUI without aggravating factors, you could still spend anywhere between 5 days and 1 year in jail. You will likely be left to serve unpleasant probation requirements for a period of up to 2 years, be required to pay fines ranging between $600 and $1,000, and serve up to 96 hours of mandatory community service.

If you are charged a second time, you will likely face misdemeanor charges, however, penalties will be increasingly more severe for each subsequent DUI. You will be subject to time spent behind bars, ranging between 10 days and up to 1 year, up to four years of probation, up to $1,500 in fines, and as much as 120 hours of mandatory community service.

A third offense DUI charged as a misdemeanor will also lead to severe penalties. These include, between 60 days and 1 year spent behind bars, up to 4 years of probation, as much as $1,500 in fines, and up to 120 hours of community service. Not to mention, any subsequent DUI’s will automatically lead to more serious felony charges.

Facing charges for a felony DUI is extremely serious. Generally, if you are eligible for a felony DUI there were either extreme circumstances involved or a significant prior history of DUI’s. Emilio De Simone, at DUI Law Firm Denver expounds upon this saying “if you’ve had three previous DUI’s or if the DUI resulted in serious bodily injury or death, then the DUI will likely be charged as a felony.”  Thus, due to their association with severe harm to others or repeat offending, consequences for felony DUI’s are typically very harsh.

A felony DUI, due to three or more prior offenses will result in a class 4 felony. This carries with it consequences, such as 3 years of mandatory parole, up to 6 years spent behind bars, and as much as $500,000 to be paid in fines.

A felony DUI that caused the severe bodily injury will also result in a class 4 felony. The penalties require a prison sentence ranging between 2 and 6 years, 3 years of mandatory parole, and between $2,000 and $500,000 to be paid in fines.

The most serious penalties are reserved for those who kill someone as a result of drunk driving. In such cases, the perpetrator will face a class 3 felony DUI with consequences, including up to 12 years spent behind bars, as much as $750,000 to be paid in fines, and a required 5-year parole period.